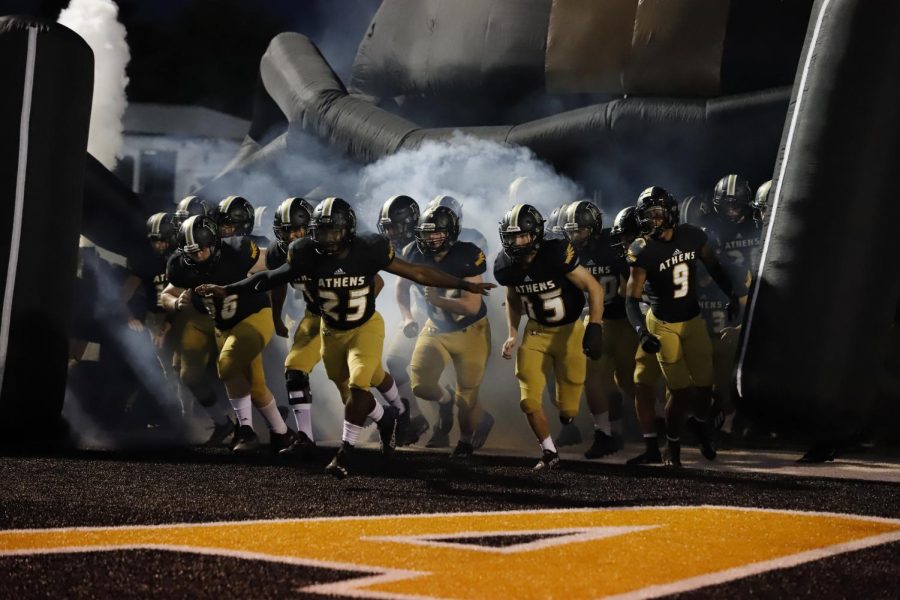 For the varsity football team, the season started off with a victory at the Fort Payne game with a score of 41-40. The game started off rough with a score of 0-16 in the first three minutes. Later in the third quarter, the team was down 20-40. Ultimately, the game ended with the Golden Eagles taking the win when Fort Payne missed the long field goal as time expired.

The team put a lot of hard work and time into practice. From adjusting plays for a new opponent to never wasting a second of their hours of practice. Their practices were scheduled in 5 minute periods, and all the coaches had a plan for each period. The team worked hard, and that could be seen in the passion and effort they put into everything they did.

“Everyone that played really cared about winning, and every game we would try our hardest to,” senior Tylan Miller said.

The homecoming game against Buckhorn ended with a win and a score of 27-24. The tension was high as the scores were neck and neck throughout the game. The tension turned into celebration at the end of the fourth quarter when the Golden Eagles scored the winning point.

“I felt great,” senior Jeffery Wiggins said. “It was a big game and ended how we needed it to that night, and there’s nothing like celebrating with the team.”

The end of the season ended with a loss at the Decatur game with a score of 34-56. According to Coach Ethan Whiteside, the game was a “suspenseful” one. The night started out with a good first half, having success on offense and some special plays the team worked hard on. Then the second half wasn’t as good with the offense unable to get anything going.

“The Decatur game was such a roller coaster as a coach” Coach Daniel Terry said. “The guys played hard each snap, and Decatur was a better football team that night. We wish the season would have ended differently, but we as coaches are all proud of the hard work the players put into this season.”

Even with the losing season, the team is keeping their hopes up and working hard for the next season. The team started to practice for the 2022 season on the Tuesday after the Decatur game. Their main focus is to get stronger, faster and grow closer together as a team.

“I am feeling great about the upcoming season!” junior AJ Buiniskis said. “The locker room has been animated everyday of the off-season so far, everyone is encouraging each other and its definitely been creating a great energy for the team. I’m looking forward to see how much this team will grow as the off-season goes by. I feel like we have already made big strides since the end of last season, so there’s no doubt in my mind that it will continue to be like that.”